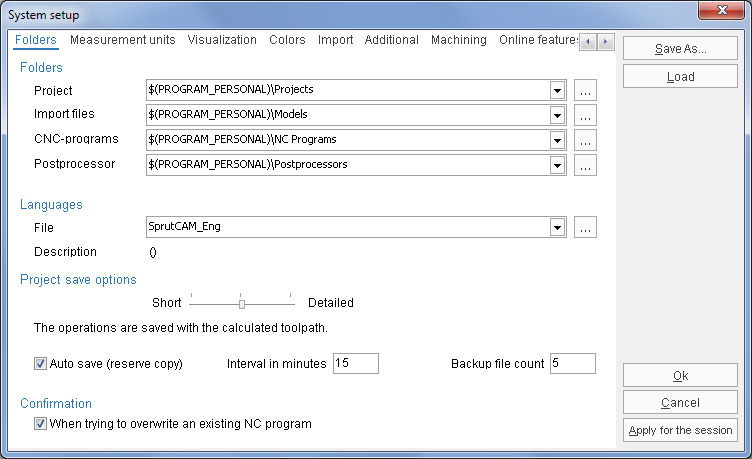 In this window the user can set default paths for the SprutCAM files.

The paths can be entered manually as well as by using the path selection dialogue, which is accessed by using the

There are three pre-defined variables, which can be used for defining the corresponding directories (folders):

When defining the real names of the directories used during the running of SprutCAM, the defined variables will be substituted by the appropriate full path used at system start-up or the user defined (edited) settings.

System languages can be change on the <Languages> panel. The language change will be applied on current session.

Changing of the <Project save options> is to manage size of the project files. The project file size will be bigger if more detailed information is saved. Source data only (geometrical model, coordinate systems, operations and their parameters) is saved for the short mode. Any information which can be calculated is not saved for the mode. A tool path of operations is saved in addition to the foregoing data for the middle mode but intermediate workpiece states are saved too for the detailed mode.

The <Auto save> – automatic saving of current project every time, that defined in <Interval in minutes>.

The number of backup files depend on <Backup file count> option (by default it has value 5). Backups are formed in two ways:

All backup files are saved in "<projectfolder>\__history\<projectname>.stc.~ver~".

It is possible to switch off a confirmation message during an NC file generation into the existing file on the <Confirmation> panel.