A workpiece model of an operation defines the material to be machined. This means that it defines the initial shape of the workpiece from which the required finished component will be produced.

The roughing operations perform machining of the entire workpiece that lies outside of the model being machined. For the finishing operations the system machines surface areas that lie inside the workpiece area.

The initial shape of the workpiece is specified in the root node of the machining tree. It can be defined as a sum of the following elements:

For elements <A cylinder swept around the part> radius of cylinder is calculated by part faces not a part box.

For all cylinders it is possible to be allocated along any of principal axis, to be described around box, a inscribed in box, with an axis in the middle of box or in an origin point of co-ordinates.

Also <Auto>, an definition type of workpiece or model which will be active if in the appropriate list of a model and workpiece it is added nothing has been added.

Workpiece definition window if shown below. 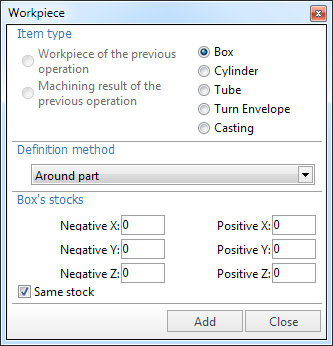