The Robot Axes Map allows to define manual and fine-tune automatic control laws for the excessive degrees of freedom of a robot (the 6th axis, the rails axes, the rotary table axes). The feature is available at the Operation Setup by pressing the ellipsis button next to the Robot axes map parameter.

The feature is available in the following SprutCAM configurations:

First you have to choose the robot configuration/state to be used in the operation. It's the same configuration/state that you can edit in the Operation Setup under the Robot Axes Map parameter. The robot configuration is defined by the "Flips" - the alternative positions of robot's joints (base, elbow, wrist) which allow the same position of the tool relative to the workpiece - and the modes of positioning of excessive axes such as rails and rotary tables (Move Up E1, Rotate E2).

In the Optimized Axis combobox you select the axis that you define the control law for at the moment.

The map resolution can be set in the Resolution box as the amount of steps along the Y axis to be calculated.

To build or refresh the map hit the Build map button.

Under the 'Collisions' checkbox there are 2 checkboxes for specifying whether part and/or workpiece are accounted for in the collision detection. They are enabled only if the parent 'Collisions' checkbox is set to 'True'. It is advisable to switch them depending on the type of machining - cutting, additive machining, or welding. 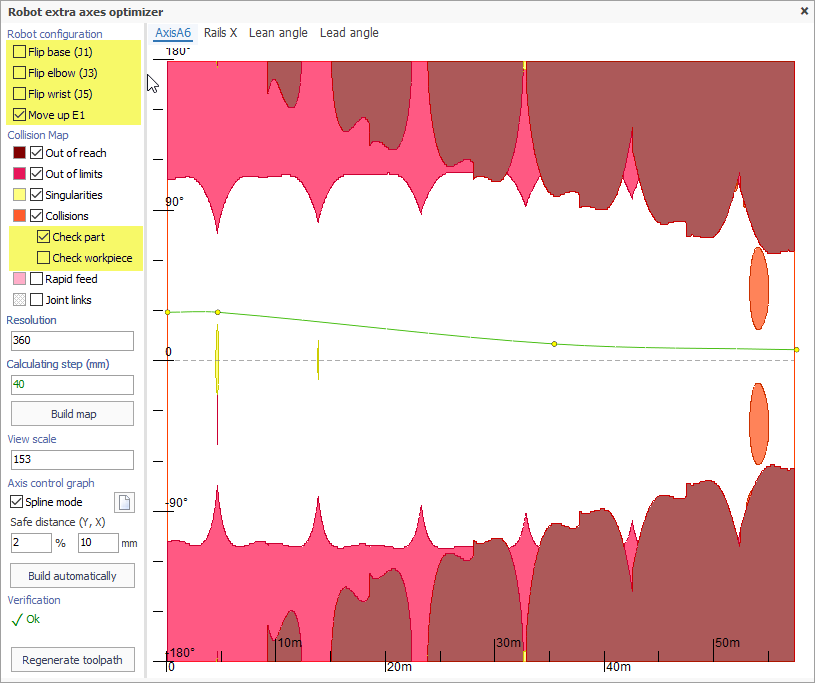 The axis control law is defined as a spline curve. By default there is no spline. It means the optimized axis value either stays the same (in manual mode) or is controlled automatically (in the automatic mode)  for the entire toolpath (the horizontal gray dashed line).

The goal is to create the nicest curve possible that passes through the collision-free white zone from left to right.

Use the Clear button to erase the spline.

At the same time in the graphic view the collision zones in the actual toolpath curve are also marked with thick strokes of the corresponding collision type color.

You can either click on the empty space in the axes map or move the mouse while holding the left mouse button to position the tool to the corresponding position of the toolpath.

To apply the axis control law to the toolpath click the Regenerate toolpath button.

The Robot Axes Map is available for robots as a part of the additional 'Robot +'  module for SprutCAM's configuration:

* - the additional 'Robot +' license for support robots is needed.